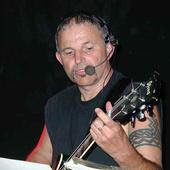 Now that that the by-election is over - which Labour would have won even if the animals in Auckland Zoo were the sole campaigners - and given that Mrs K, unreportedly the Korean woman associated with Richard Worth cannot be named, let's write about something that actually matters.

Musician Chris Knox is unable to speak or walk at the moment after a stroke. He is currently in Auckland hospital. He has had surgery, but doctors anticipate that at best he will be in a wheelchair for the rest of his life. He may recover his speech after speech therapy.

I first met Knox, I think, in the late 1980's. He was wearing a "happy flowers" shirt and jandals - the latter and shorts being his standard performance garb.

If you have never heard of Chris Knox, he is a man who has written what was judged the 13th best Kiwi song of all time - Not Given Lightly.