Friends on both sides 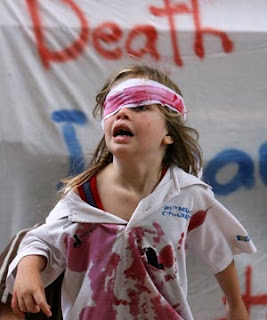 Well, the protests have escalated while I was out of town. I know Father Gerald Burns, David Zwartz, Cat Noakes-Duncan and Adrian Leason (whose son, Mana, is pictured at a protest). They are all good people. And all have strong views on the situation in Gaza. But I certainly think its a little weird that Zwartz is moaning about kids being plastered in fake blood saying that to have kids in protests like that is wrong because they don't "know of the politics of war". Does he think it is wrong for Israel to plaster at least 260 kids with real blood in the past few days, just as much as he thinks it is wrong for Hamas to fire rockets?

At least the kids with the fake blood are pictured alive. About as alive as these girls who are pictured writing notes on Israeli missiles that read "Nazrala whit love, From Israel and Daniele". Do you think that is fine, Mr Zwartz or perhaps these kids know of the politics of war so that makes it okay?

I wouldn't jump to conclusions about the number of children dead. The figure of 260 comes from the Palestinian Ministry of Health, which is controlled by Hamas. So we have no way of knowing whether it is true or whether it is made up as Hamas propaganda. And considering the numbers of apparantly fake photos and videos that keep coming out of Gaza, I wouldn't trust those figures at all.

Israel is taking great care to target only military targets. But considering Hamas bases themselves at mosques, schools and possibly hospitals, deliberately placing Palestinian civilians in harms way, it will be impossible for Israel to avoid all civilian deaths.

So why do you believe Israel "propaganda" (Hamas uses homes, mosques and hospitals to fire from) but not UN figures (the number of children who have been killed now stands at 265) because you claim that they are Palestinian figures controlled by Hamas??

This comment has been removed by a blog administrator.

Sorry for the late reply Dave. I am not blindly believing Israel's perspective either. Bear in mind this is a war, and the information from both sides will at least in part be propaganda serving their own purposes.

But Israel will be taking care to minimise the international outrage against themselves, because they rely on having allies in the West. It would be foolish for them to deliberately target civilians. There are youtube videos of Hamas firing mortars from schools, and this sort of thing makes the Israeli side of the story more plausible than the Hamas line.

Ultimately the truth will be somewhere between the two perspectives.

Why do you believe UN figures, when these are derived purely from the PMH, which is controlled by Hamas? I don't care whether the UN accepts the figures or not. What I care about is where the figures come from in the first place, and where they come from is highly suspect.

After eight years of Israel being fired upon by rockets and mortars by Hamas means that Israel views are now as harden as Hamas.

Hamas has done a great job in this by ensuring there will never be a peace between Israel and the Palenestian people.