You look worried...things not going according to plan 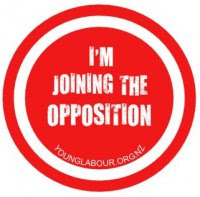 You have to watch this video from Young Labour. Its a rip off of this ad. Check out Pete Hodgson's cameo. He'll get you the good stuff. Then the bells of socio-economic freedom will chime for all.

Thanks Young Labour. What a laugh.

It's clear: Labour want to be followers, rather than leaders. Perhaps that's why it is in opposition. Join the opposition. It started with a lone protest. Then more and more followed (about 10 apparently). And all you can do is watch. Helpless. Twitching.

Face it Labour, the tide has turned. And it ain't going your way. All you can do is ask people to join the "opposition". Labour wants to be the the natural party of opposition. However I do really think that Labour's "I'm joining the opposition" capaign is at least nine months too late.