The reason behind Helen Clark's image

Looks count for women running for office. Women had better appear attractive as well as competent if they want to be elected to political office, according to research published on Thursday. Everyone had to seem competent to get a vote. But while men needed to appear approachable to get an edge, women had to be good-looking, the researchers found. But the researchers relied on photographs.

Guess which of the two photographs Helen Clark would have chosen. 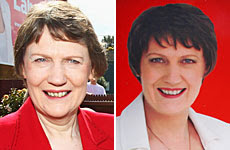 The report is here.