The Maori Party is very concerned that Hone Harawira's behaviour in Europe, and a subsequent email that he sent,are serious breaches of the kaupapa and tikanga of the party.Harawira skipped an important meeting in Brussels so he and his wife Hilda could spend a day in Paris.But he lied to Tariana Turia, telling her he didn't attend meetings because he was sick - all to get a day of fun in Paris. He paid for the extra travel himself. 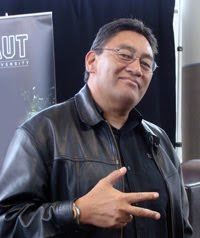 "Gotta ask the question eh? Who's paying for [wife] Hilda? You're no better than that wanker Rodney Hide and the white mofos you complain about," Mikaere wrote, referring to Hide's actions in taking his partner on an overseas ministerial trip despite the Prime Minister John Key's direction against the practice. And get off your moral high horse while you're at it -- nobody forced you to be an MP."

Harawira wrote back starting his email; "Gee Buddy, do you believe that white man bullshit too do you? White motherf...ers have been raping our lands and ripping us off for centuries and all of a sudden you want me to play along with their puritanical bullshit."

Harawira then went on to say how much time and energy he put into fighting for Maori and what a big role his wife Hilda played in that."And quite frankly I don't give a shit what you or anyone else thinks about it. OK?

In an email I received from him some time ago, I was told "piss off arsehole". I forwarded the e-mail to party leaders who did nothing. For Hone this language is normal and is accepted by the Maori Party. So is his behaviour. That has to change. He is a disgrace to the Maori Party.

Also, his spending was easily double that of virtually every other MP, but says he could not care less about what people about that. He says his constituents are the only people he is answerable to.