I went into Wellington today and decided to park my car in Bowen Street. There is a clearway up until 9:30am so at about 9:27am I parked my car so that I could get a park at 9:30am to get to my appointment on time. Immediately after I parked a whole lot of cars lined up behind me. There were several cars already parked.

Then precisely at 9:28am out popped a parking warden from behind the bushes. The car in front of me shot off. I got out of my car and asked the warden if there was a problem, as I could see him looking at my car and scribbling something down. I was told I could not park before 9:30am and was told to leave or else I’d get a ticket. I did so and found another park at 9:30am – two minutes later up the road.

I thought that was a bit heavy handed so as it happened, I was going to the Council anyway. I took the time to speak to the manager who coordinates the parking warden contract and was advised that there is a six minute grace period – ie. that nobody should be ticketing after 9:24am on the basis of parking contrary to signs on a 9:30am clearway.

However, what I did not know that up the road there were a few other wardens trying to get a scalp. And at least one did and I have the proof. My camera was busted but here’s a pic off the phone. 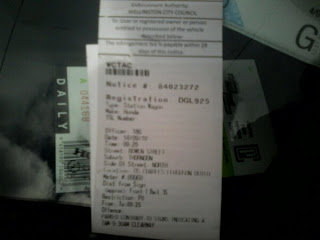 If you click to get a larger image, you`ll see that this ticket – not the only one - was issued at 9:25am, on Bowen Street for "parked contrary to signs indicating a 7:30am to 9:30am clearway". This is despite that I was pretty sure that there were no cars lined up at that time – perhaps it was ticketed at 9:26am, and he fudged the time by a minute. However what the parking warden appeared to do was to wait until the driver got out of his car and soon as he started walking off, that warden appeared behind his hiding place and pinged him for $60.00 – directly contravening council policy. Then by 9:35am all parking wardens had taken off to the next clearway to see how many others they could get. I noticed many drivers who parked ahead of and behind me didn't get out of their cars until after 9:30am in case they too got ticketed.

This is not a training issue, it is systemic money grabbing against council policy. And it is happening every single morning Monday- Friday. The Council claimed not to know anything about it. Do you believe them?