This morning, three men – one of whom is a friend of mine - went on trial in the District Court in Wellington charged with damaging the Waihopai spy base in Blenheim in May 2008. They damaged its operation by deflating one of the mammoth domes, causing $800,000 damage.

The Waihopai spybase is essentially a foreign spybase on New Zealand soil, and submits raw data directly to the US without checks by our government. 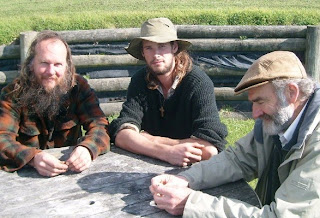 Sam Land, Adi Leason and Peter Murnane [profiled here] broke into the spy base using bolt-cutters and used two ten dollar sickles from Bunnings to slice into one of the domes that covered the satellite dishes. The men, from a group called Ploughshares, aimed to draw attention to New Zealand's involvement in the U.S. war in Iraq through the presence of this base. The dome took 15 minutes to deflate, and the men prayed while it was deflating – then were arrested.

About 200 peace activists from New Zealand and Australia (including Cairns activist Bryan Law who has come over to blog the trial) have gathered in Wellington to support the three men. There are events, vigils, demonstrations and concerts on all week including a public meeting on Wednesday night in which Keith Locke will speak. No doubt this song will be sung a few times.

There will be a Ploughshares interview 7:10am on Breakfast tomorrow.[ Update you can watch it here ]. The defendants will open their case tomorrow. One is representing himself.