In December Treasury said unemployment would peak at a 7%. John Key said that Treasury was being too pessimistic. Figures released shows that unemployment is now 7.3%. The last time it was that high National was in Government, too. But there is one major difference: the 10 years Labour spent getting people off the unemployment benefit ( and off ACC) to sickness and invalids benefits: 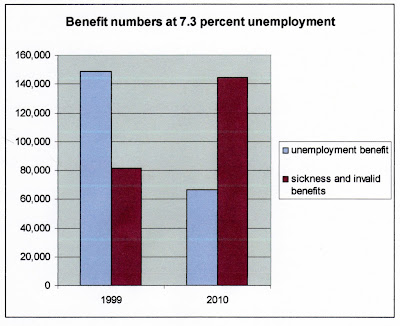 I don't think unemployment has peaked yet - and the Government is silent on what to do about rising unemployment except blaming it on population growth - but 25.5 percent of all job seekers have been out of work for more than 6 months.Anyone know how many jobs the job summit created?

Employment is going to be a key issue at the next election. The question voters will be asking is: Can Labour do any better? I think it can.