The billboard - changing the story

Over the past few days it has been apparent why St Matthews in the City, an Anglican Church, erected a billboard in Auckland depicting a sad Joseph and his wife Mary in bed. It was not to inspire people to talk about the Christmas story, as initially claimed. Nor was it to provoke conversation about spiritual matters by lampooning the literal Christian conception story, as claimed later when fellow clergy disapproved.

The real reason why the billboard was erected was to slag off the idea of a male god impregnating Mary, and to deny the literalism of the virgin birth at Christmas. 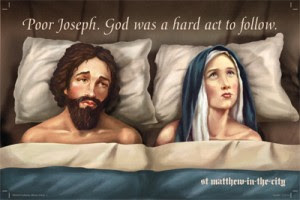 In other words it was there purely to express a particular church's viewpoint( via an attack on opposing fundamentalist viewpoints) that the virgin birth never really happened and a belief that it is a fantasy story, with the consequent implication that Jesus was not sinless.

These guys call themselves progressive Christians - but it is not so clear what they are progressing to, or whether they are reactionary Christians who react to literal orthodoxy. Promoting beliefs that some Christians would describe as heretic is hardly going to inspire people to speak about the Christmas story, 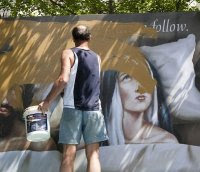 the virgin birth story, or any other story save the story that this church is merely looking to create a story to get publicity. The atheist bus campaign is a much better campaign, in terms of getting people to talk about God matters, and some of these idiot Christians can learn a thing or two from the so-called atheists on how to publicise minority opinions.

The billboard has now gone down. Perhaps it will be replaced by this one. Can anyone let me know if so.

We drove past that awful two by two billboard the other day.

I mean, why bother calling yourself Christian...

PS We've just blogged on this one too.

Dave
the hy[pocrites got what they deserved on this world and store up what their judgment for another.
Not sure about your tone viz a viz fundamentalist?
Sounds like you're trying to have both sides of your cake and eat it.
1. it is basic Christianity - core to the faith not iffy.
2. The St Matthews crowd are calling God a liar essentially as if He hasn't control over the bible what sort of God is He?
MikeNZ

You're right, Madeleine. Why bother calling yourself Christian if you don't take, without question, every single word of the Bible literally? I mean, I don't know about you, but I was always taught to believe that the entire human race descended from two people, that the entire world was put here for the pleasure and use of man, and that you should stone to death any unruly children.

Well, I certainly hope you're taking the Bible literally enough to never wear clothings made of a mix of fabrics, that you lock yourself away when you're menstruating, that you treat all epileptics as people possessed by demons and that you never ever plough a field with a mix of livestock.

Oh, and I hope that, when complete your law degree, you heed the advice of the Bible and take no other law than given to you by God in the Bible, and that you plead most strongly for any rapists you come across to be married to their victims.

Because that's what the Bible says, and no amount of cognitive dissonance on your part will rectify that.

“Woe to you lawyers also! For you load people with burdens hard to bear, and you yourselves do not touch the burdens with one of your fingers. Woe to you! For you build the tombs of the prophets whom your fathers killed. So you are witnesses and you consent to the deeds of your fathers, for they killed them, and you build their tombs. Therefore also the Wisdom of God said, ‘I will send them prophets and apostles, some of whom they will kill and persecute,’ so that the blood of all the prophets, shed from the foundation of the world, may be charged against this generation, from the blood of Abel to the blood of Zechariah, who perished between the altar and the sanctuary. Yes, I tell you, it will be required of this generation. Woe to you lawyers! For you have taken away the key of knowledge. You did not enter yourselves, and you hindered those who were entering.”

And remember, Christ did not abolish the laws, and you, as a servant of man-made laws, are guilty of the murder of the Word and the prophets who spoke for God (Matthew 5:17-20)

“Do not think that I have come to abolish the Law or the Prophets; I have not come to abolish them but to fulfill them. For truly, I say to you, until heaven and earth pass away, not an iota, not a dot, will pass from the Law until all is accomplished. Therefore whoever relaxes one of the least of these commandments and teaches others to do the same will be called least in the kingdom of heaven, but whoever does them and teaches them will be called great in the kingdom of heaven. For I tell you, unless your righteousness exceeds that of the scribes and Pharisees, you will never enter the kingdom of heaven."

I hope you can truly learn your position as a woman and a lawyer, thanks to the Bible.

I should add, Dave, that Jesus wasn't sinless, and was never considered to be sinless. Jesus carried the sins of man, and that's why he had to die. Jesus was, at the end, only human.