The Māori Party and ETS

updatedIt is well known that the Māori Party has decided to vote for( as opposed to support) the emissions trading scheme, despite Rahui Katene and Hone Harawira being publically opposed to the scheme, as are many of those in the five iwi who this deal is proported to support. Harawira has said he only answers to his constituents. 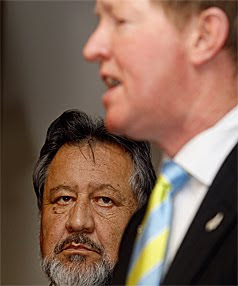 Did his constituents support the ETS? This deal could be the make or break of the Māori Party. The party does not support the legislation. It is really the two leaders who are ministers telling the rest of the caucus how they must vote - and doing a really bad job justifying the rationale behind that stance.

On 19 November Nick Smith signed his letter to Māori leaders Yours sincerely. On the same day he wrote anothe letter to the Iwi Leadership Group, peppered with Maori salutations, greetings and macrons. Four days later a letter started off "tena koe Tariana and Pita, (instead of tena korua)and concluded heio ano(that is all), whereas naku noa would have been perhaps more appropriate.

If Nick Smith is going to use a bit of Māori, perhaps he should do a crash course on the basics so he can get it correct. I wonder when he will be demoted?[ update particularly after this - how embarrassing.]

I’d like to recommend that all bloggers who support Nātional, particularly David Fārrar and WhāleOil, put a macron over the appropriate letter in the word 'Māori' in all blog posts ;-0.

Then they can work on other phrases such as 'Te Rūnanga o Ngāi Tahu'.