Destiny Church,MoMENtum and The Cult

TVNZ must have a sense of humour.The other day I spotted the irony that that TV2 programme The Cult, was advertised alongside a well written piece on the Destiny Church [see below], written in the wake of the MoMENtum meeting, the meeting where 700 followers pledged their allegiance to God Brian Tamaki.

As it happens, Momentum is the name of a cult - in fact it is the name of the cult in the TV show The Cult. "Momentum, in an effort to avoid problems, forms a 'council' of longest serving members." Not sure if they have 700 or not.

Ha, there's even a person in New Zealand chapter of The Cult called Hannah, the same name as Brian Tamaki's wife. She's in love with the cult leader, who is charming, articulate but ultimately delusional.According the website:

Hannah is in love with Edward, who genuinely believes in what he preaches...He has already started to reinterpret the Momentum belief systems to suit his own ends...He truly believes he is special.

Is this where Destiny Church got the the idea of MoMENtum from? 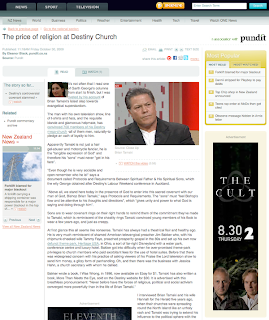 I hope Inland Revenue has a good hard look at this fellow. Most of these types beieve Dod's law transcends man's law and it would not surprise me in the least if he were cheating on his taxes.