Uh-oh - that's no way to announce an election 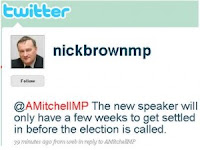 Labour's chief whip in the UK is Nick Brown. Austin Mitchell is a Labour MP and a former whip. They are discussing the UK election, which apparently may be in a few weeks after a new speaker is appointed. The current speaker was forced out earlier this week. Brown's Twitter has been deleted, after earlier being restricted. That's what you get when the whip tells MPs - via Twitter - when the election may be.