If the Maori Party go with Labour then National already have an official policy of not entrenching the seats and will oppose it. Since Parliament must pass the 75% entrenchment provision with 75% at some point in the process National can and will veto it. So no entrenchment.

But,if the Maori Party go with National - and the only reason they would is if they agree (along with all their other demands) to entrench the seats - then Labour must back entrenchment or lose all the Maori seats - perhaps for a very long time. So they will be entrenched.

I think he's right. If I was in the Maori Party this is one of the key messages I'd be promoting at the post-election hui. Furthermore, the Maori Party wouldn't have to go into coalition if it didn't want to.

Act backs entrenchment, so do the Greens. However, United Future doesn't so Peter Dunne could be in sticky situation thanks to the Maori Party should National gain power.

So? Read this (from here) 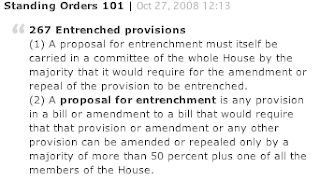