You won't notice, but this is an old template that is now Big News. I have changed a few things around so all you will notice is that there are no archives - they are on the old template I`m working on. 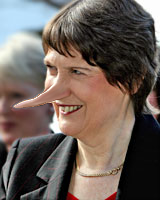 Helen Clark has announced that Labour will be offering tax cuts. Coincidentally, it so happens that it can now afford to- right on the weekend of the Labour Party conference and within a year of an election with Labour sliding in the polls. The announcement did not say when the tax cuts will be reversed, who will get a tax cut, when, and how much.

The announcement came after Michael Cullen recently told the Finance and Expenditure Select Committee that people who think there should be tax cuts on the back of the big surpluses should be taken out and quietly drowned.

The difference between Labour and National on tax is that you can rely on National to have a bettter tax policy and to deliver it.

Its a bitter way with Labour - way bitter.

powered by ODEO
Chris Knox has written a song that will be used in Labour's campaign. It's pretty good, but like many of Labours policies it starts well and goes downhill. The song is a bit repetitive towards the end. You can hear it here. Its called " Its a better way with Labour, but sounds like "its a bitter way with Labour".